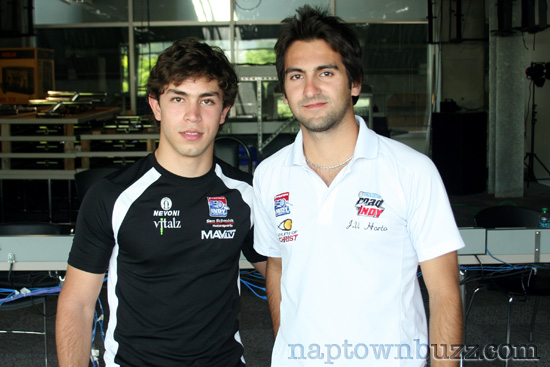 A conversation with Victor Carbone and JV Horto…

Brian: First question for both of you guys… What are your racing backgrounds?

Carbone: I started in go karts. Did it for quite a few years. Then moved up to Formula cars and did a few races in Skip Barber then went straight to F2000. Two years in F2000 then straight to Indy Lights.

Brian: And for you JV?

Horto: I started also in go karts. I did a couple of years, and then I moved here to Indianapolis. In 2009, I did Formula BMW. And two years of Star Mazda.

Brian: What is the biggest difference you find between the Indy Lights car and the other cars you’ve driven?

Carbone: So far, it is the biggest and most powerful car I have driven. So that basically says it all. Everything is in a greater scale. Everytime you step up, it is kind of a new challenge for you and the level of professionals you work with as a team and stuff so every little bit counts… The competitiveness of the field as well.

Horto: First, the speed. The speed increases a lot. The engines are a lot more powerful so we have to be careful of the throttle and be a lot smoother. But then, it’s opposite of the breaking. The breaking we have to really work with the breaks and work a lot harder to really use the downforce. And the drivers around us have a lot more experience so it is harder to get a good result.

Brian: What is your ultimate racing dream?

Horto: Yeah, of course the Indy 500. And to just be a professional driver in the Izod IndyCar Series. That’s the biggest goal and dream.

Carbone: For me it’s quite the same. It’s Indianapolis. It’s a dream to come race here and to be part of the IndyCar Series one day.

Brian: Growing up, who were your favorite drivers to watch?

Carbone: My main guy that always was my hero was Ayrton Senna, but I didn’t have a chance to watch him race. Guys like Tony (Kanaan) and Helio (Castroneves) who always have been really successful here are guys that we always look up to.

Horto: Yeah, the same, Ayrton Senna, I was a kid when he died, but just watching his races and tapes and movies, I see that he was a very special guy and a very good driver. And today, again Helio & Tony and actually every driver that is able to get into IndyCar, if they get there they have been successful. So everyone that’s in IndyCar right now.

Brian: What are you going to be doing during the 500 this year?

Horto: I don’t know. Just sit on Pit Lane watching and trying to learn as much as I can from outside of the track.

Carbone: I kind of always watch it from the Pit Lane, but this time I want something different, so I’ll be out with the crowd.

Brian: We’ll be out in Turn 3 if you want to come hang out in the Snake Pit.

Carbone: I was there last year in Turn 3, it was quite fun. But this year I’ll be in the short chute between One and Two. It’s fun to mix with the crowd and see their reactions.

Mel: What are some of your favorite restaurants to go to in Indianapolis?

Carbone: We look up to the same drivers and stuff, and we kind of hang together. I could answer that. We go to a Japanese steakhouse, and this can be yours, too, right?

Horto: Of course, the Brazilian Steakhouse.

Brian: Are there really places like that in Brazil?

Horto: Yes, they are really expensive, so I used to go at least once, one time a month because we can’t spend much money. But, that is a good place.

Carbone: It is actually quite similar to Brazil one.

Mel: That is good to know because that is always my question: How authentic are these restaurants really?

Mel: Question number two: Do you guys think firesuits will every be in style for the general public? (Silence) The big suit that you guys wear to get in the racecars?

Carbone: To wear in the street??? (giggles)

Horto: Maybe if it is too cold!

Mel: Right! That’s what I was saying to Brian. I was like, we could use this as a snowsuit in the winter.

Horto: It gets pretty cold here in the winter. That’s probably a good idea to wear the whole thing–helmet, underwear, that would help.

Mel: Do you think people would look at you weird if you wore that in Walmart or come up and ask for your autograph?

Carbone: At least if your house was on fire, you would be okay.

Mel: Yeah, you’d be ready. Okay, here is a question–if you don’t mind me asking, how old are you guys?

Mel: 21. Okay. So you’ve had some time to drive on the real streets. How many speeding tickets have you gotten?

Carbone: Yeah, I actually got one last week. But, overall, I’ve been okay. I think I got two, only.

Carbone: So that was my second one.

Mel: When you got your ticket were on the interstate or were you just on a regular street?

Carbone: Yeah, I was on 465 and coming to downtown and the speed changes from like 60
to 50 or something like that, and um, I don’t really know it kind of really well here so I just kept going and I saw some lights behind me.

Horto: Never got one.

Horto: I only, I got a warning one time because I didn’t stop completely at a stop sign, but that’s it.

Carbone: Mario Kart, for sure. For sure! I think I have tons of millions of miles in that game. Since I was really really small, I remember playing and today think I am a professional about that!

Mel: Nice! What about you?

Horto: I think the same. I play a lot of that with my friends, and actually got in a fight one time because one was winning.

Mel: Are you really good at it?

Horto: It depends on what driver I get. I like the one that has his, what’s his name…

Horto: Yeah. He has the huge head…

Carbone: The white and red one.

Horto: The really small and really tiny one.

Brian: Then finally, guys, what do you want to tell the fans about the race coming up on Carb Day? Also, let us know how to get a hold of you guys–your website, Twitter, and Facebook.

Carbone: Just want to tell them to come to the race ‘cause I know that Carb Day there is going to be a big party over there. Um, I don’t get to see much though, and it is always a tight, tight packed race. In the IndyCar you don’t get that kind of racing, and for the guys who have come to the Speedway on Friday and have seen it, know what I’m talking about. So, it’s always good racing and good fun. If you want to know more about me, just go to my Twitter, it’s @victorcarbone13 and my website is victorcarbone.com.

Brian: We will get that linked. How about you, J.V.?

Horto: I just ask for everyone’s support. If they are not able to come here, just watch on TV and on the website. My Twitter is @JVHorto with H-o-r-t-o or Facebook fan page is all J.V. Horto and JVHorto.com.

Brian: Thanks for sitting down with us, guys.