To purchase general-admission or reserved seats for the Chevrolet Performance U.S. Nationals, log on to NHRA.com/tickets or call the NHRA Ticket Sales Center, 800-884-NHRA (6472). Tickets can also be purchased for the Top Eliminator Club (TEC) the exclusive members-only hospitality package. General-admission tickets for children 12 and younger are free with any paid adult ticket.

The most historic and tradition-rich event in the NHRA Mello Yello Drag Racing Series, the Chevrolet Performance U.S. Nationals has been contested annually since 1955, and its past list of winners includes “Big Daddy” Don Garlits, Shirley Muldowney, Don “the Snake” Prudhomme, John Force, Bob Glidden, Tony Schumacher, and Kenny Bernstein, among other legends.

The Chevrolet Performance U.S. Nationals will feature intense side-by-side racing at more than 320 mph as drivers in Top Fuel, Funny Car, Pro Stock, and Pro Stock Motorcycle compete for their share of the $2 million purse and battle for important world championship points.

The stakes will be high as teams will battle for the final top 10 spots for the Mello Yello Countdown to the Championship. With an increased number of points in play due to the point-and-a-half system for this event, the drama on ChampionshipMonday is expected to be more amplified than ever. Perhaps more important, drivers will compete to earn a permanent spot in NHRA history as a Chevrolet Performance U.S. Nationals winner.

The event also will showcase the NHRA Traxxas Nitro Shootout, in which the top drivers in Top Fuel and Funny Car will race for $100,000 paydays in separate bonus races.

The race also will offer thrilling competition in both the NHRA J&A Service Pro Mod Drag Racing Series and the NHRA Lucas Oil Drag Racing Series, which also will be highlighted by the annual Mopar Hemi Challenge for Super Stock cars. Also highlighting the race weekend will be the appearance of Jet Cars to thrill the crowds during the course of the weekend.

The schedule for the 2016 Chevrolet Performance U.S. Nationals at Lucas Oil Raceway at Indianapolis is as follows:

And it’s the world’s most prestigious drag race for a reason. The best of the best from all over the world head to Indianapolis to compete in the event known as the Big Go. Nearly 1,000 drivers will compete in 12 categories with hopes of hoisting the elusive Wally trophy on Labor Day Monday. With heightened competition and a holiday weekend crowd in attendance, a win at the Big Go often goes down on racers’ résumés as the biggest single-race achievement.

As if that wasn’t enough, it’s the last race of the 18-race regular season before the six-race Mello Yello Countdown to the Championship playoff. Drivers and teams will be racing to secure the final top 10 spots for the Countdown and with an increased amount of points in play via the point-and-a-half system for this event (150 points to the winner), the drama on championship Monday is expected to be more intense than ever.

For many of the competitors, the race has evolved into much more than an annual contest of speed. For those who seek to become a part of its mystique, winning the event has become a necessity. Racers say that no career is truly complete without a win at this, drag racing’s grandest event.

For the first time, the Chevrolet Performance U.S. Nationals will be aired live on FOX and FOX Sports 1 (FS1). Dave Rieff leads the coverage with Tony Pedregon offering insight as an analyst and they along with the rest of the broadcast team give the viewers an exclusive behind-the-scenes look at the sport.

A special Monday edition of the SealMaster NHRA Track Walk also will take place prior to final eliminations, where many of the sport’s most celebrated drivers will walk alongside fans down the historic dragstrip. As part of NHRA’s ongoing celebration of the 50th anniversary of Funny Car, one legendary Funny Car driver will be honored during pre-race ceremonies. Fan-favorite vintage racecars will be on display in the Hot Rod Junction, along with several autograph sessions featuring the biggest stars of the sport will be featured throughout each day of the event. On Friday, a special fireworks show will close out that day’s racing.

Thundering Jet Cars will take to the track to make exhibition passes as part of Friday and Saturday’s racing activities. As usual, one of the highlights of the spectacular pre-race show on Monday will feature a highly-skilled skydiver soaring into Lucas Oil Raceway with an American Flag in tow during the traditional performance of the National Anthem.

Drivers in the NHRA Lucas Oil Drag Racing Series and the NHRA J&A Service Pro Mod Series also will look to become winners of the prestigious event during the weekend. The fastest Super Stock cars will challenge for the ultimate bragging rights and a bonus purse during the popular Mopar HEMI Challenge.

Downtown Indianapolis will come alive with NHRA excitement on Wednesday, Aug. 31, when the Chevrolet Performance U.S. Nationals Fan Fest comes to Monument Circle in the heart of the city. NHRA race team showcars, classic cars, live music, video displays and giveaways are just a few of the activities scheduled for the event. Fans will also be able to get autographs from their favorite drivers in one of the largest autograph sessions of the season. In addition, the official event press conference will take place during the Fan Fest, where several news announcements will be made and the random lottery drawings for the No. 8 positions in the Traxxas Nitro Shootout will be conducted. The Fan Fest begins at 10 a.m.

The biggest, most historic and prestigious event in the NHRA Mello Yello Drag Racing Series, the Chevrolet Performance U.S. Nationals, has been contested annually since 1955. Originally known as “The Nationals” and first held at an abandoned airstrip in Great Bend, Kan., the event made stops at Kansas City, Mo., Oklahoma City and Detroit before eventually moving to Lucas Oil Raceway at Indianapolis in 1961.

FOX national broadcast and FS1 will televise coverage of the Chevrolet Performance U.S. Nationals for the first time in event history. FS1 will air highlights from the event on Sunday, Sept. 4, at noon and 5 p.m. EST. The broadcasts will continue on FS1 with two hours of live coverage on Monday, Sept. 5 starting at 11 a.m. EST. The extensive coverage will then continue live on the FOX national broadcast channel at 1 p.m. EST.

One of five motorsports facilities owned and operated by NHRA, Lucas Oil Raceway at Indianapolis sits on 267 acres of land just west of Indianapolis in the town of Brownsburg, and features three race courses: a championship drag strip, a .686-mile paved oval and a 2.5-mile, 15-turn road course.

Tickets for the world’s most prestigious drag race can be purchased by calling the NHRA Ticket Sales Center at (800) 884-NHRA (6472), or online at www.NHRA.com/tickets. 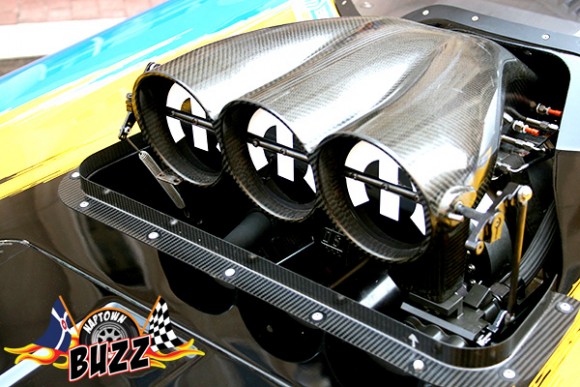 The Big Go Block Party returns to the town of Brownsburg, Ind. on Aug. 23, as the community celebrates the Chevrolet Performance U.S. Nationals NHRA Mello Yello Drag Racing Series event at Lucas Oil Raceway on Aug. 31-Sept. 5. The event will take place from 5 to 8 p.m. at Town Hall Green. The Big Go Block Party is hosted by the Town of Brownsburg, NHRA, Lucas Oil Raceway, Don Schumacher Racing and John Force Racing, and will feature family activities, entertainment and concessions.

Team show cars will also be on display during the event including the Top Fuel dragster of Tony Schumacher and the Funny Cars of Pedregon, Diehl, and Ron Capps.

Children will enjoy the free inflatable playground and a variety of exhibitors will have interactive experiences for attendees. Local food trucks will provide hot and cold concessions.

The event is a celebration of the jaw-dropping action of the NHRA Mello Yello Drag Racing Series that returns central Indiana and is the world’s most prestigious drag race.

The best of the best from all over the world head to Indianapolis to compete in the event known as the Big Go. Nearly 1,000 drivers will compete in 12 categories with hopes of hoisting the elusive Wally trophy on Labor Day Monday. With heightened competition and a holiday weekend crowd in attendance, a win at the Big Go often goes down on racers’ résumés as the biggest single-race achievement.

Premium Top Eliminator Club (TEC) tickets are going fast for the Chevrolet Performance U.S. Nationals at Lucas Oil Raceway at Indianapolis Aug. 31-Sept. 5. Those who purchase tickets will be the first to experience the new TEC pavilion which will be completed prior to the event at the historic facility. The building is located adjacent to the starting line of the drag strip on the west side of the track.

Tickets can be purchased at NHRA.com/tickets for $395 per person.

The new pavilion is a 16,000 square foot multipurpose event space that will be air-conditioned for usage during the Chevrolet Performance U.S. Nationals. The building will feature a covered entry way, private restrooms, capacity for more than 1,000 people, a state of the art audio visual system, and will feature a full service bar area.

Schumacher moved past “Big Daddy” Don Garlits for the most Indy Top Fuel wins and into a tie with Pro Stock great Bob Glidden for most pro category wins at the world’s most prestigious drag race.

In the semi-finals, Schumacher defeated Shawn Langdon, and Spencer Massey defeated Antron Brown. In the final round, Schumacher powered his U.S. Army dragster to a 3.806 at 315.34 to hold off Spencer Massey, who trailed with a 3.828 at 319.37 in his FRAM/Prestone dragster.

In Funny Car, Neff defeated Matt Hagan, and Tim Wilkerson defeated Johnny Gray in the semi-finals. In the finals, Neff pushed his Castrol GTX Ford Mustang to a final-round performance of 4.079 at 311.05 to finish in front of Wilkerson’s Levi Ray & Shoup Shelby Mustang that finished in 4.152 at 286.13.

It was Neff’s second consecutive victory at this event, his third win of the season and the ninth of his career.

In Pro Stock, Connolly defeated Vincent Nobile, while Enders defeated V. Gaines in the semi-finals. In the finals, Connolly used a reaction time advantage to edge teammate Erica Enders in the Pro Stock final round.

Connolly covered the distance in 6.589 at 210.05 in his IDG Chevy Cobalt to finish just in front of Enders, who posted a quicker but losing 6.580 at 210.31 in her GK Motorsports Chevy Cobalt. It was Connolly’s third U.S. Nationals win and the 23rd of his career.

In Pro Stock Motorcycle, Hines defeated Hector Arana Jr., while Arana defeated Ed Krawiec in the semi-finals.  In the finals, Hines rode his Screamin’ Eagle Vance & Hines Harley-Davidson to a 6.937 at 191.70 to take the easy win as Arana’s Lucas Oil Buell slowed at mid-track and finished in 7.456 at 157.54.

Hines earned his first Indy victory by outrunning Hector Arana. It was Hines’ fourth win of the season and 29th of his career.

The NHRA Full Throttle Drag Racing Series will return to historic Lucas Oil Raceway at Indianapolis Sept. 8-9 for the conclusion of the rain-delayed Mac Tools U.S. Nationals presented by Auto-Plus. The event was originally scheduled for Labor Day weekend, but persistent rain showers from the remnants of Hurricane Isaac forced series officials to delay the event by one week.