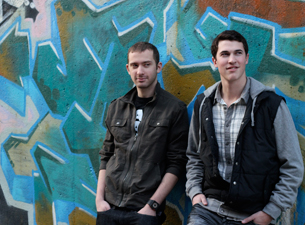 Timeflies is a music duo consisting of Producer/DJ Rob Resnick and vocalist Cal, both 22 years old. Though they got their start in Boston, the guys are originally from New Jersey and New York, respectively. Using elements of pop, hip-hop, electro, dubstep, and rock, Timeflies aims to escape genre limitations. Their goal has always been to make music that people can connect with. The duo has been playing shows at colleges and bars across the country and are recently released their debut album, “The Scotch Tape”

Tickets are on sale now. General admission tickets are $17.50 in advance, $20 day of show. Purchase your tickets through LiveNation.com, Old National Center Box Office, Ticketmaster outlets, or charge-by-phone at 1-800-754-3000. Applicable fees apply to all ticket sales.