Tag Archive for The Show Must Go On 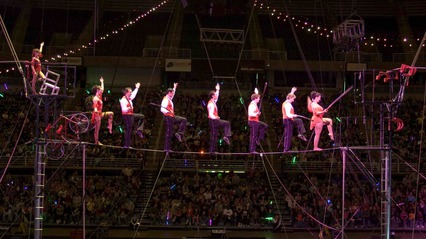 For eight generations, The Flying Wallendas have amazed all who watch their daring artistry and dazzling skill. Since 1780 the Wallenda family has been a traveling circus troupe of acrobats, jugglers, clowns, and animal trainers. Throughout the 20th century, they were famed for their wire walking and flying trapeze, some done as high as 10 stories above the ground and all without a net. Now, in the 21st century, The Wallendas face diminishing audiences, a collapsing business model and a vanishing way of life. As they struggle to hold onto their rich heritage, The Flying Wallendas must beat back the harsh realities of performance anxiety, financial despair and spectator ambivalence while continuing to bring dreams to the dreamers from under the big top.

The post The Show Must Go On at The Toby on Tuesday, July 24, 2012 appeared first on Naptown Buzz.