Terre Haute, IN – Indiana Conservation Officers responded to a call about a man struggling in the water near Fairbanks Park.

The incident took place around 2:15 p.m. Monday afternoon when witnesses reported a man struggling in the Wabash River before disappearing under the water. Indiana Conservation Officers used sonar technology to locate and recover the body of a male victim.

Based on the clothing description of the victim in witness accounts conflicting with that worn by the recovered victim and a review sonar data, Indiana Conservation Officers initially believed there was a possibility of a second individual in the water and extended their search area. No other victims were located. The search area extension located the belongings of the original victim along the shoreline and a nearby campsite on city property containing possible evidence of a violent crime scene. Terre Haute City Police Department detectives were contacted to investigate the campsite, which was determined to not be related to the water recovery.

Indiana Conservation Officers are currently investigating the incident, and an autopsy is being completed this morning. The identity of the victim is being withheld until relatives can be located and notified. Vigo County — This morning at 8:30, Indiana State Police and Vigo County emergency agencies responded to a truck versus scooter crash in the northbound lanes of 11800 South US 41. This is near Pimento Circle and was in front of the Boot City Store.

Preliminary investigation revealed a 2013 Ford F350 truck, driven by 18-year-old Brock E. Megenhardt of Coal City, IN., was northbound in the driving lane of US 41 approaching Pimento Circle, when a car in front of Megenhardt moved into the passing lane, suddenly revealing a slow moving 2011 Taotao brand scooter, driven by 53-year-old Danny J. Elkins of West Terre Haute, IN. Megenhardt’s vehicle then struck the Elkins scooter in the rear, ejecting Elkins onto the roadway.

Elkins was transported to Terre Haute Regional Hospital for the treatment of shoulder and back injuries. He was wearing a helmet which most likely reduced the severity of his injuries and possibly saved his life.

Drugs/alcohol do not appear to be a factor in this crash.

The attached picture of the scooter was after the crash, but not at the scene. 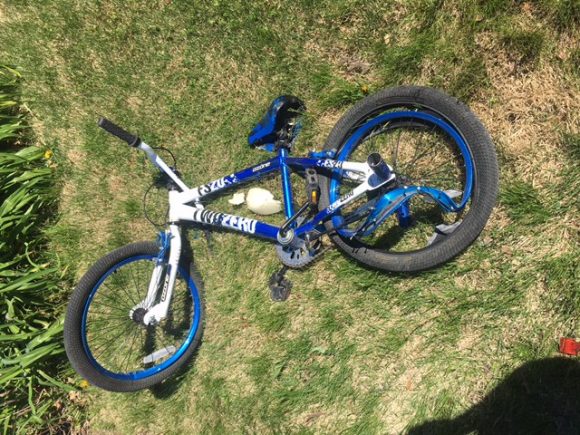 Vigo County—This afternoon around 3:00, Indiana State Police and Terre Haute Fire/Rescue/EMS units responded to the area of 18th and Farrington Streets in Terre Haute for a bicycle versus van collision. One child was transported for injuries.

Preliminary investigation revealed a seven-year-old boy was southbound in an alleyway approaching Farrington Street. The boy is alleged to have applied his brakes, but a possible brake malfunction caused his bicycle to not stop, and sent him into the path of a westbound on Farrington Street, 2005 Chrysler van, driven by 60-year-old Mary R. Kidwell of Terre Haute, IN. Upon impact, the young rider was thrown from the bike prior to the van traveling over the bicycle. The young boy was transported to Terre Haute Regional Hospital for a possible fractured leg and other injuries, believed to be non-life threatening. He was not wearing a safety helmet, but he is not required to. Ms. Kidwell appeared to not have adequate time to properly brake as the bicyclist suddenly appeared in her path.

Drugs and alcohol were not a factor and no citations were issued.

His parents were notified and are with him at this time.

Pictures from the scene are attached.