ISP Detectives Investigating the Death of an Infant in Putnam County

Putnam County – Indiana State Police detectives from the Putnamville Post are currently investigating the death of a three-month-old infant in the town of Bainbridge.

Preliminary investigation revealed that on April 27, 2017, at 5:50 a.m., Putnam County 911 Dispatch received a call from the infant’s father reporting his unresponsive son at their Main Street home. The father attempted medical aid until the arrival of emergency services, with the infant then being transported to Hendricks Regional Health, where the infant was later pronounced deceased.

Later that evening, an autopsy was conducted at Hendricks Regional Health and early indications are the infant may have been the victim of an unsafe sleeping environment with a parent. However, the investigation is still underway with full autopsy results expected in six to eight weeks.

No other information will be released at this time.

The Indiana State Police and Department of Child Services wish to remind parents of the danger of co-sleeping with infants. Both agencies also encourage when infants are placed into cribs that the sleeping area is free from pads, stuffed animals, and other articles that may at some point, impede or stop the normal breathing efforts of the infant. Sudden Infant Death Syndrome (SIDS) research has shown that the safest place for young babies to sleep is in a cot or bassinet next to their parent’s bed.

The post ISP Detectives Investigating the Death of an Infant in Putnam County appeared first on Naptown Buzz.

An Evening for Ella and Friends 2012 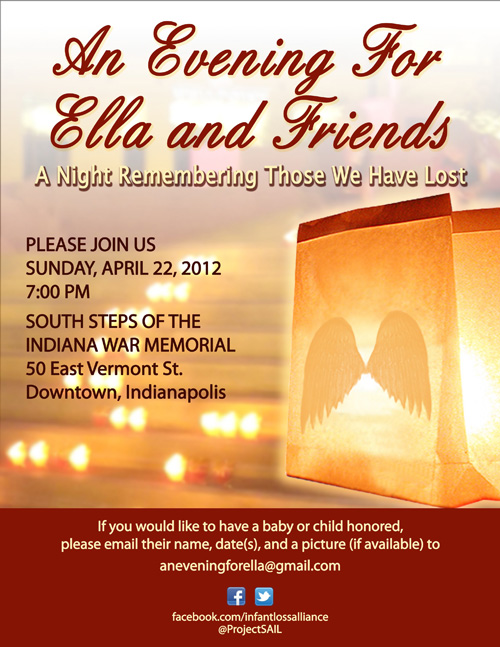 On Sunday, April 22, 2012 at 7 pm, the fourth annual “An Evening for Ella and Friends” will be held on the south stairs of Indiana War Memorial.  A memorial service will be held to remember the lives of infants lost to SIDS, miscarriage, stillbirth, and all other types of sudden infant loss—as well as those that will continue to be lost.  The public is invited to attend this rain or shine event.

An Evening for Ella and Friends is proud to announce this year’s promotion of Healthy Start and Marion County Health Department’s initiatives. Indianapolis Healthy Start offers education, referral and support services to pregnant women and their families with the goal to eliminate the disparities in birth outcomes and infant survival rates in MarionCounty.

“An Evening for Ella and Friends was established after the loss of our 10 week old daughter, Ella, on April 22, 2008.  We hope to help parents prevent their baby’s last night of sleep and at the same time, help them find the support they need to get through the devastation of miscarriage, still birth, or infant loss.  We want people to remember the babies that have passed away so we can give the best possible care to those babies fortunate enough to still be with us,” said Mel McMahon, event organizer and community activist.  Ella McMahon-Hodges passed away at just 10 weeks, five days old of Sudden Infant Death Syndrome (SIDS).

To learn more about this event, call Mel McMahon at (317) 446-3864 or email AnEveningForElla@gmail.com. Interested individuals can access information on ways they can help create awareness and/or show support for families and babies in their local communities by visiting http://www.mchd.com/mch.htm.