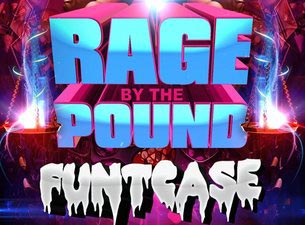 FuntCase, High Rankin, Schoolboy and Nerd Rage hit the stage at Deluxe at Old National Centre Tuesday, October 30, 2012 for the Rage By The Pound Tour. The show starts at 7:00pm.

FuntCase aka James Hazell is a producer and DJ from Bournemouth, UK. He is known for his raw and dirty sound, forging the way with his controversial ‘filthy’ style of dubstep. High Rankin is a Dubstep producer. Schoolboy, EDM producer from Los Angeles who is best known for his track “Checkmate” which climbed the Beatport ranks peaking at an impressive #4 slot on the top 100 dubstep chart. Nerd Rage’s music, hand-in-hand with his stage presence, is loud, aggressive, and right in your face.

Tickets are on sale now. General admission tickets are $15 in advance, $20 day of show. Purchase your tickets through LiveNation.com, Old National Center Box Office, Ticketmaster outlets, or charge-by-phone at 1-800-754-3000. Applicable fees apply to all ticket sales.