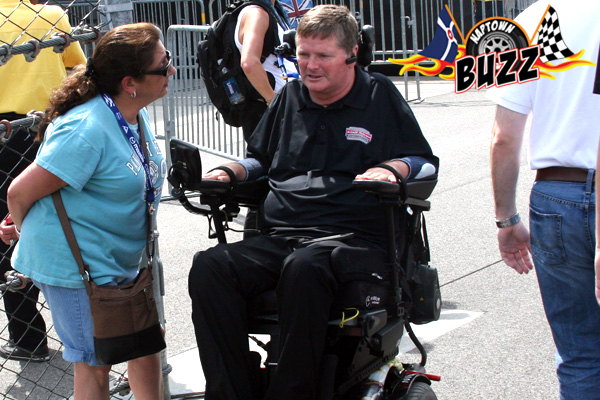 Sam Schmidt never had the chance to race Mario Andretti in his Indy car driving career. On May 13, he’ll finally get his chance, albeit under “unfair circumstances,” according to Andretti.

Schmidt, the Verizon IndyCar Series team co-owner, announced today at Long Beach that he will go head to head with the racing legend next month on the road course at Indianapolis Motor Speedway. They will race similar semi-autonomous cars prepared by Arrow Electronics ahead of the INDYCAR Grand Prix.

“Everyone looks up to Mario on and off the track,” Schmidt said. “I can’t think of anyplace better to do this than Indianapolis Motor Speedway. It’s nice to not be a team owner for this. I just show up and drive the car. I’m honored to be part of the program and excited.”

Schmidt, paralyzed from the neck down from a crash testing an Indy car in 2000, will drive a Corvette Z06 SAM car, a semi-autonomous vehicle that global technology company Arrow Electronics modified for him. Sensors mounted on a high-tech headset the Las Vegas resident wears connect to infrared cameras mounted on the dashboard and detect his head-tilt motions to steer. A sip-and-puff device that Schmidt breathes into enables him to accelerate and brake. Voice commands enable Schmidt to change gears and turn the SAM car on and off.

“This is awesome,” said Andretti, the 77-year-old who won the 1969 Indianapolis 500 and four Indy car season championships. “It’s a great opportunity to see what (the project) is all about. I feel like I’m really, really going to be struggling.

“It’s going to be interesting on the road course. There will be a lot more work to do and a lot more braking. Hopefully, that will work in my favor. We’re going to have it out, big time.”

The race is another example of the partnership between Schmidt, Arrow and IMS, which has let Schmidt test SAM cars at the track during its development over the last three years.

“Indianapolis has long been considered a test ground for automotive technologies, and Sam and the Arrow Chevy Corvette have continued to prove that, including a 150-mph run last year at IMS,” said Doug Boles, president of Indianapolis Motor Speedway. “Adding a match race between Mario Andretti, one of the most popular and talented drivers to ever compete at Indy, and Sam this May just takes the technology to the next level.”