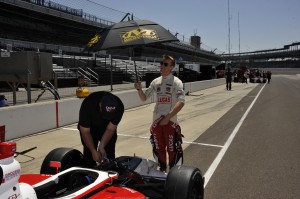 Brian:  This is Brian from Naptown Buzz and we are here today with…

Brian:  What is your racing background?

Webb:  Um, well, I started in go karts when I was about nine or ten years old, in the UK and then I won that championship, so I got picked up by BMW, the company, and went in to Formula BMW as a scholarship driver, and then kind of progressed up the European ladder which is kind of BMW, Formula Renault 2 Litre, Formula 3, where we finished in the championship, and then I went into world series last year.  So we raced at some great tracks, all F1 tracks.  With the F1 Monaco on the Sunday, which is really really really good fun, then moved over here, to Indy, to start kind of a career towards IndyCar.

Brian:  So what do you find to be the biggest difference with the Indy Lights cars as opposed to the other cars you’ve driven?

Webb: Um, there’s definitely a lot of grunt in the engines, quite a big engine. In terms of arrows, a little bit less than what I’m used to from last year.  A lot of times, you’re a little bit slower, but in terms of straight-line speed, and obviously ovals are completely new to me, as well, so being able to do just kind of under 200 miles an hour is uh, a real buzz that I’ve not really had before.

Brian: So do the ovals scare you at all at first, or is it something you get used to pretty quickly?

Webb:  Um, I think scared is the wrong word.  I think you definitely get used to it.  It’s definitely daunting the first time you do it and it will take more than a whole day to get used to it especially when you start running in packs and you get to used kind of like, okay, this is normal to be 190 miles an hour, side by side.  Yeah, it’s…  It’s…    There is a lot to learn, and I kind of underestimated how much there was to take on board.  So, um, I’m still getting used to it, and I think I still always will.  I’ll always be learning with this oval stuff.

Brian:  Your ultimate goal then is to get up into the IZOD IndyCar Series and ultimately the 500?

Webb:  Yeah, I think I would love to do IndyCar next year or the year after.  I think the goal is to do it within the next two years, so, and to be here doing a full season, and not only the other street tracks, but here at the Indy 500.

Brian:  Growing up, who were your favorite drivers?

Webb: Um, I’d say when I was really young, probably Ayrton Senna and obviously I think as I’ve grown up and kind of looked more over the whole world, I don’t really have one driver I look up towards. I get along well with Dario, and I think he has obviously done really well over here, so he is someone I look up to in terms of someone who has blended away from the European ladder to come over here and, um, pursue his, his dream and be at the top in IndyCar, whether it be F1 or IndyCar. He had the opportunity for both, so that is part of the reason I am over here.

Webb:  During this 500?  Um, well, I’ve been here for kind of pretty much every day since the cars have been going out, so I will be with the team um, on the pit wall, with the headset, listening in to what both Townsend Bell and Simon Pagenaud are saying, learning as much as I can from the feedback from them, and what the track’s like, and everything else.  We had a test day just before they all kicked off so, we’ve been around, we’ve had our test day.  We were fifth quickest so, it was a pretty good day.  It was the first time, hey.  Um, so we’ll keep learning throughout this week and a half, and then Thursday, Friday is our two days next week and then I can kind of relax a bit more, hopefully, with a trophy and then watch the Indy 500.

Brian:  So do Simon and Townsend give you any tips on driving?

Webb: Yeah, I’ve just been in the debriefing room with Townsend so it is good to sit down and kind of talk to him kind of one on one as well as listening to what he debriefs with the engineers.  Simon, his birthday is today actually, which I only just found out, so he is having a whale of a time, and just been setting some really quick laps.  Yeah, it is great to learn off them.

Brian:  Now, we have our Twitter and Facebook followers submitted some questions. So, I understand you are recently living here in Indy.  So what are your favorite restaurants so far?

Brian:  Second question:  Do you think firesuits will ever be in style for the general public?

Webb:  Probably not. You can get away with maybe wearing one, wearing one inside the track if it is good enough, but maybe not to the general public.

Brian:  On the ovals, do you ever want to go the opposite way so you can turn right?

Webb:  Yeah.  Yeah. I think, especially with the IndyCar guys, ‘cause they do so many laps.  I mean, there have been 8 and a half thousand laps done already, um, just, just by today, so I think, um, it’s always an urge to go the other way.

Brian:  Do you have any speeding tickets?

Brian:  Last question.  What is your favorite racing video game?

Webb:  Favorite racing video game…  Um, I’d probably say the new F1 game on the PlayStation at the moment.  I’m currently working in England and Europe with a consult company, I can’t say, but it’s a pretty big one, making a new racing game with them.  So, I’ve never been involved with something like that.  So, that’s something, I’ve just come back from England a week ago and I was doing two weeks with that consult company developing a game there.  So it’s really interesting being behind the scenes  and kind of, training the developers in to how a car really should feel.

Brian:  That’s cool.  Do you have anything else you want to tell the fans about the race, the season, the series?  And then also, let us know to get a hold of you–Facebook, Twitter, your website…

Webb:  Um, well, to get a hold of me on Twitter, I’m @oliverjameswebb, all lower case.  Basically my full name with no spaces. Um, Facebook, if you just type in Oliver Webb, there will be one fan page and my page there.  And my website is oliwebbracing.com or oliverwebbracing.com. In terms of the season, we pretty much do every single race except for one that the IndyCars do now for the rest of the season and hopefully, we can get some good results on the ovals as well as the street courses like I’m used to.

Brian:  Thanks for talking to us today.

Webb:  All right, thank you.