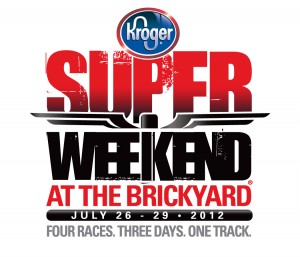 Fans can enjoy the color and excitement of NASCAR and get geared up for the inaugural Kroger Super Weekend at the Brickyard through the fourth annual Hauler Parade on Thursday, July 26 on Main Street in Speedway, Ind.

The event will take place from 5-9 p.m. Admission is free.

A parade of more than 40 NASCAR Sprint Cup Series haulers – the large, colorful trucks carrying stock cars to and from the track during the season – will arrive on Main Street starting at 6 p.m. Haulers will park in two lines on Main Street between 10th and 15th Streets, giving fans an up-close look.

Legendary NASCAR team owner Leonard Wood is the grand marshal of the Hauler Parade. Defending “400″ winner Paul Menard will join Wood as a special guest in the parade. Menard also will receive his 2011 Brickyard 400 winner’s ring on the Hauler Parade Stage on Main Street in Speedway.

Another featured guest is Troy, Ala., paramedic and fire fighter Curtiss Shaver, the hero who received naming rights to the Crown Royal Presents the Curtiss Shaver 400 at the Brickyard powered by BigMachineRecords.com NASCAR Sprint Cup race Sunday, July 29 at the Indianapolis Motor Speedway. Shaver will be incorporated into a series of VIP activities throughout the race weekend that also will honor America’s unsung heroes.

Other fun activities include live music, a question-and-answer session with Wood, an appearance by Miss Sprint Cup, a media pit stop challenge and an autograph session with selected NASCAR and GRAND-AM Road Racing drivers.

The NASCAR Nationwide Series and two GRAND-AM series will race at IMS for the first time during the Kroger Super Weekend at the Brickyard, with the Hauler Parade taking place Thursday evening after a full afternoon of Nationwide Series practice at IMS.

NASCAR and GRAND-AM race cars will be on display. Kids can have fun at the IMS Kids Club area, featuring a bounce house, face painters, creative projects and appearances by IMS Kids Club mascots Axel and Alley.

Dawson’s On Main restaurant and other local eateries will have food and beverages available for purchase throughout the event. Parking will be available on Speedway town streets west of Main and also at the Indianapolis Motor Speedway’s gravel Main Gate Parking Lot, located on the south side of 16th Street, east of the Speedway gas station.

A variety of vendors will participate in the Hauler Parade, including BlueMile, Miles Ahead Performance, the 500 Festival, Scorpion and Turf, Coke Recycling, GRAND-AM, NASCAR Nationwide and more. IMS race tickets also can be purchased at the Hauler Parade.

Fans also can watch the haulers parade north on Main Street and east on 16th Street at 8 p.m., as they depart the Hauler Parade single-file and enter the Indianapolis Motor Speedway.