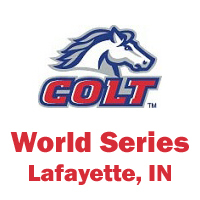 The 10-team Colt World Series runs this week, concluding with the championship baseball game at 6 p.m., Thursday, August 9. All games are played at Loeb Stadium at Columbian Park, at the corner of Wallace Avenue and Main Street in Lafayette, IN. Single-game admission is $5 for adults; $3 for students.

“Not only are these games great baseball, you’ll see extraordinary energy, determination, and skill in these players,” said Lafayette’s Tim Clark, president of the Colt World Series. “These players are fit and well-practiced. They fought hard to earn a spot in the tournament, so every one of them will be playing to win.”

Each team brings 18 players and competes in at least three games in the Olympic-format tournament.  “We hope to fill the stands every night, so we invite baseball fans to head to Lafayette,” Clark said. “The action on the field and in the stands is always fun and great for a family outing, with lots of traditional ballpark food available.”

Lafayette first hosted the Colt World Series from 1969 to 1971. The tournament returned in 1973, and has been played there every year since. Lafayette’s Harry Bradway was instrumental in securing Lafayette as the venue.

Pony Baseball, open to youth ages 4 to 18, includes various other age divisions besides the Colt Division.

For more information on the Colt World Series, visit www.coltworldseries.com.