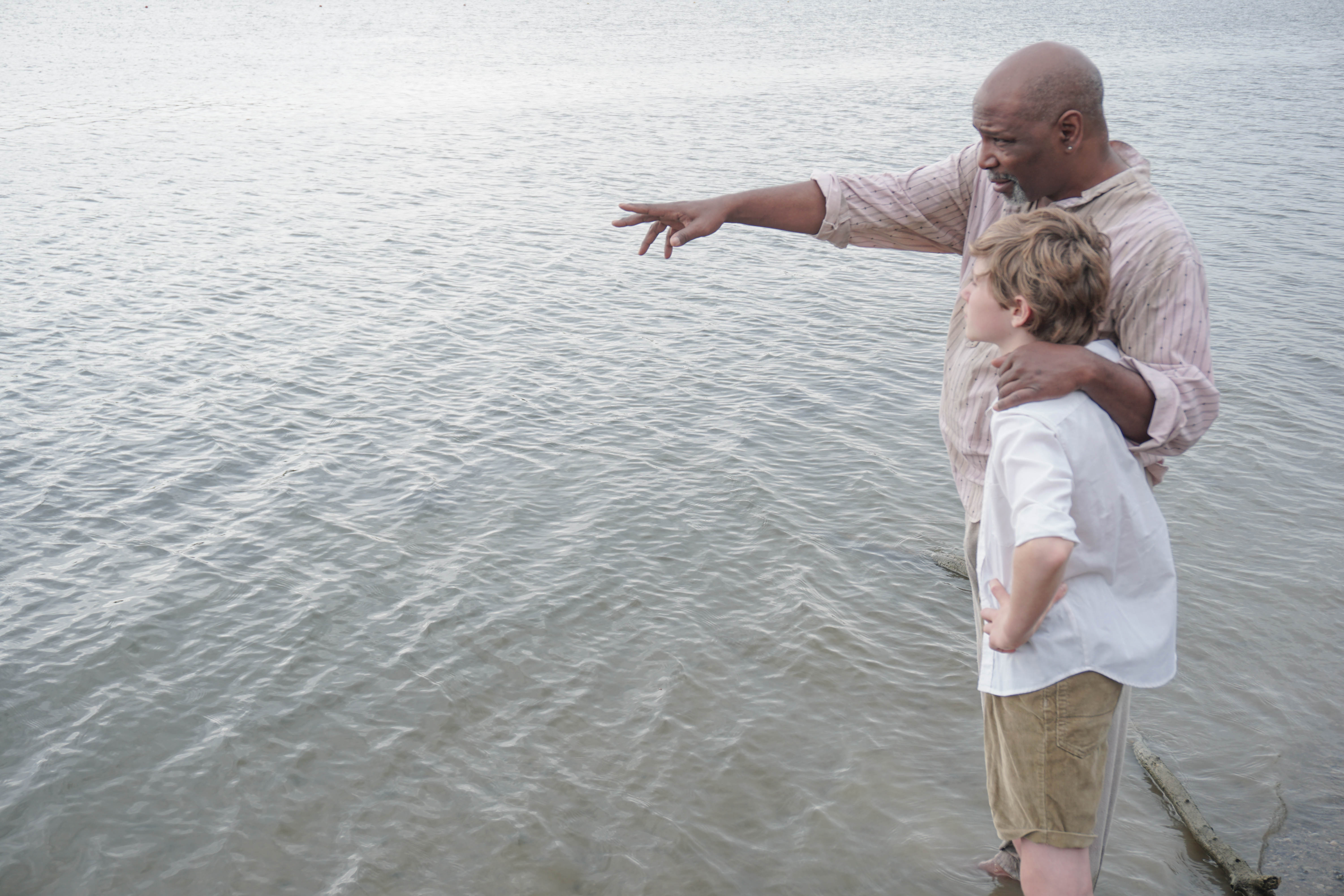 Amid a war-torn 1942, a young white boy and an older black man find themselves stranded on a Caribbean island in the Indiana Repertory Theatre’s (IRT) The Cay, on the Upperstage from January 28 through February 26.

In this story of opposites, The Cay follows a friendship that blossoms despite racial division as Phillip (played by Dalyn Stewart) and Timothy (played by David Alan Anderson) learn that without each other, neither will survive. Together, the duo brings Theodore Taylor’s award-winning novel to life and share that despite age, upbringing or race, friendship can be found in the most unlikely of places.

Taking place on a set that brings to life a variety of circumstances and locations, the characters survive being stranded at sea, tossed amidst a hurricane and deserted on an island. Geoffrey Ehrendreich, IRT Properties Manager, believes thecomplexity and creativity of the set to be the best work of the season.

“My favorite theatre is when you have to use your imagination, and this production encourages just that,” said director and IRT dramaturg, Richard J Roberts, revealing that the sound effects have been created using musical instruments and theprops, including two giant palm trees, have been fashioned from items one might find washed ashore after a shipwreck.

“This production asks the audience to look beyond the surface reality of stage objects and imagine a world of natural wonders, just as the characters must look beyond their personal differences and see the possibilities of friendship,” said Roberts.

Celebrate the New Year, with new friendships found only in the IRT’s The Cay. Learn more about this production by visiting irtlive.com.

Fences at IRT March 9 through April 4

August Wilson’s “Fences” will be performed at IRT March 9 through April 4.

25th year of A Christmas Carol at IRT through December 26

Celebrating its 25th year at the Indiana Repertory Theatre, (IRT) A Christmas Carol the beloved story of loss and redemption, returns to the OneAmerica Mainstage on November 14 through December 26. Set in mid-Victorian London atop more than 1,000 pounds of snow, Dickens’ characters are brought to life in this faithful, fanciful and frolicsome adaptation, […]

Opening its 44th season with The Great Gatsby, the IRT is pulling out all the stops for this much-anticipated production, which comes to the OneAmerica Mainstage from September 30-October 25. Money, class, romance and corruption collide as the Great American Novel comes to life on stage. Opulent parties, passionate affairs, jealousy and murder are tangled together […]

Beginning Jan. 23, the Indiana Repertory Theatre (IRT) will bring Lois Lowry’s Newbery Award-winning children’s novel, The Giver, to its Upperstage. This cross-generational story engages both adults who grew up reading the novel and children who are reading it for the first time.

IRT Partners with Dress for Success, Has Donation Drop-off Site Through Run of Good People

Now through the Feb. 1 conclusion of Good People, the Indiana Repertory Theatre (IRT) welcomes the community to donate women and men’s new and gently used professional attire to benefit Dress for Success (DFS).

Now Playing at the IRT It’s 1958 and abstract expressionist painter Mark Rothko had just landed the biggest commission in the history of modern art.  With the help of his assistant, Rothko frantically struggles against his insecurities while trying to create a definitive and moving body of work. Electrifying and captivating, this winner of the […]

The IRT closes its 42nd season with The Game’s Afoot – a very witty and glamorous comedy thriller, starring Priscilla Lindsay, IRT’s former associate artistic director and leading lady (she played in more than 60 productions during her long career at the IRT). The Game’s Afoot evolves like a mystery thriller. From the intriguing opening mini play within a play […]