Via the Indy’s Incredible Buffet & Fun Center mailing list on Tuesday: On August 18th at end of day (8pm) we will be closing our doors for good. It was not an easy decision and we do so with a heavy heart. We want to say thank you to all of you who have shared your family […]

Racing Through History (June 1, June 15 and July 27) – Using toy cars, race on a track like no other in Indianapolis for a chance to win tickets to another favorite Indianapolis pastime, an Indianapolis Indians game. Recipes Gone By/Recipes Made Anew (June 8, June 29, July 20) – Join us as we taste and explore dishes from Indiana’s […]

Pokémon Trading Card Game (TCG) and video game players, supporters and fans from throughout the U.S. will descend upon Indianapolis for the 2013 Pokémon National Championships the weekend of July 5th – 7th. The Indiana Convention Center is hosting the open, family-friendly event where players of all ages and skill levels in good standing are […]

For serious runners and walkers as well as a great family outing, the 4th Annual Ghosts & Goblins 5K/2K & Wellness Fair offers fun for everyone. You can walk or run at either distance on a course that takes you through the Arts & Design District in downtown Carmel and along the Meadowlark and Monon Trails.  […]

Play! Pokémon gives players of all ages and skill levels across the globe a chance to compete for prizes and the rights to call themselves a true Pokémon Trainer.  Tournament Organizers hold sanctioned tournaments all over the world.  These events are held regularly in game stores, and players compete for new and exclusive Promo cards.  In addition, each player is able to track their rankings and rating online.  These events, while competitive, offer regular, inexpensive organized play to everyone and are fun for players of all ages and skill levels.

The Pokémon TCG U.S. National Championships is a sanctioned title event open to U.S. resident players who have earned the requisite amount of Play! Points.  It is open to all U.S. residents in good standing and admission for the action-packed weekend is free.  For more information visit www.pokemon.com/us/organized-play.

There Once Was I Time I Was Asked About Baby Toys….

Yes, the above title is true. It happened once.

It was a far off time, as in three Thursdays ago, when I was sitting with a whiney baby– somehow most of my stories are starting off this way!– and my high school bestie, and my husband. None of the people in this story are relevant except for obviously me, and of course as always my whiney baby boy.

I was reading my email that came up on my phone ever so rudely, and was taken aback by the subject line.

It was from Circle of Mom’s and they were asking little old me what I thought a baby needed for a present under $30 dollars! ME?! Can you believe it?! [here’s the link PS.] okay well me and like half a bunch of other bloggers who were apart of the Top 25 Baby Bloggers…. When I got the coveted spot of 41 before I even had a baby to blog about?? OHHH memories.

Anyways, back to my story. I was asked what I thought a good present was. And at the time I thought this was a crazy idea of a question to ask me. ME? I mean, I just now thought of the idea to GIVE my son toys, let alone actually investigating further into the whole “lets brainstorm about whats a good idea to give the baby, and oh yeah there’s a thirty dollar limit to the awesome-ness!”

Well, even though then I had NO IDEA what I was going to say then, I decided that NOW I DO KNOW NOW!!

The Top 10 Things Jaxon Will Want For Christmas Under $30. 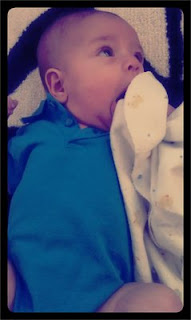 10. Blankets.– I cannot keep them away from this kid. Either he’s under them for warmth, or he’s being an even cooler cool kid and eating them. And when you think he’s done soaking them with his spit, because he’s thrown it, or kicked it off of him, think again. Because the second you forget about that sour milk smelling fabric is when he’ll grab it from behind his head magically and put it in his mouth yet again like it’s the first time he’s ever ever seen the thing.

9. Mommy hands– He loves these things! They’re only second best to Daddy hands, and the reason Mommy hands are cooler are because they come with shiney rings, and are allowed to go into the mouth [because for some reason my husband thinks it gross to have baby mouth hands? psh weirdo]

8. Pacifiers– If you think these things are only for sucking on when your a little bit sleepy or sick, then you’ve never seen my boy play with his for at least 10 min at a time. He thinks it’s hilarious to rip it out of his mouth, fumble around with trying to get it back into his mouth, trying to steal it from your hands, or just spit it out and watch who’s ever holding him try to pick it up without it hitting the floor….told you… comedic genius!

7. Books– This may actually be the first real toy, but no it’s not for reading. You may try, and you may even succeed. But really, he just wants to put it in his mouth, even if he has to almost give himself a paper cut in between his eyes and bridge of his nose to do so. He doesn’t care, he does what he wants.

6. Onesies– Now I may be a weirdo, but I don’t like changing my baby in and out of 900 pairs of pants all day long. So every once in a while I put the outfit I’m attempting to put on the baby, physically on him, and this results in the cutest game of tug of war ever. He grabs it like it’s his long lost teddy bear, and holds on till I beg him to let go, and usually he’ll only ease up his grip if he’s found my hair…which leads to… 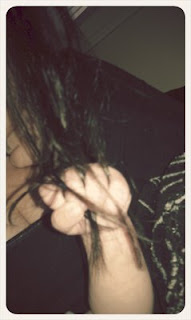 5. Mommy hair– This also is one of those second only to Daddy beard, but again, Mommy hair is more fun because it’s sometimes removable.
4.Anything that plays music– This includes but is not limited to cell phones, people singing, radios, the TV commercials I get stuck in my head daily, the two pull toys he has that play instrumental lullabies, greeting cards that make noises, our washing machine when it’s done washing clothes… you know this really could go on for ever….

3.Accessories– This one is probably the worst. I’m an accessories girl, and even though this phase hasn’t hit home full swing yet, my nieces were ALL ABOUT the nose ring pulling. And the ear ring grabbing, and the necklace choking, and the tattoo pointing. That last one is the cutest, but still is sort of lame when your trying to do something and you have baby hands all over your arms and fingers and your task is instantly harder….. And being that my son will be on top of me ALL the time as apposed to my nieces whom I saw once a week, I’m sure this will be oodles of fun for all. 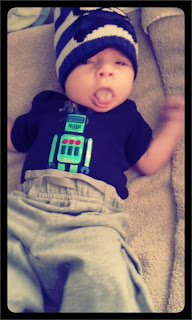 2. Tongues– This one is really cute. We have hit the age of “look at my tongue mom!!” where everything we do no matter what or when or where is met with a mini Gene Simmons impression by my little guy. He’s totally into it, and then with that of course is spitting at me and laughing because I’m cracking up at him… such a ham. 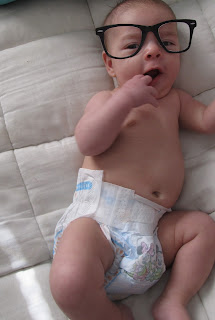 1. Baby Hands– They should put a patent on this one for the less than 5month crowd. Because if your baby is/was anything like mine, the MOMENT he found his hands, it was all up in the mouth, all the time. I cannot tell you how many pictures I have of this kid with his hands being spitty and cold and all up in his grill. It’s like he’s either eating, pooping, giggling or having his hands in his mouth. And lately, he’s figured out how to talk with his hands in his mouth. I mean clearly he’s not telling me how to end world hunger or his thoughts on Occupy Wall street, but he’s saying pretty clever things like “GEE!” and “ahhhhhhhba”…I mean, I think he’s a genius.

So there you have it, absolutely free/very cheap things to get an awesome less than 5 month old baby. I’m sure there’s cooler things out there, but so far, Jaxon D Dub hasn’t found it yet. =)

In this award-winning immersive history program, you and your family and friends play the parts of runaway slaves on the Underground Railroad. Will you find freedom? Will anyone help you? You’ll be changed forever as you explore the fears and challenges faced by fugitive slaves making their way through 1836 Indiana in this dramatic and powerful immersive history experience.

13 Days of Halloween for the Family: Day 13, Scooby-Doo 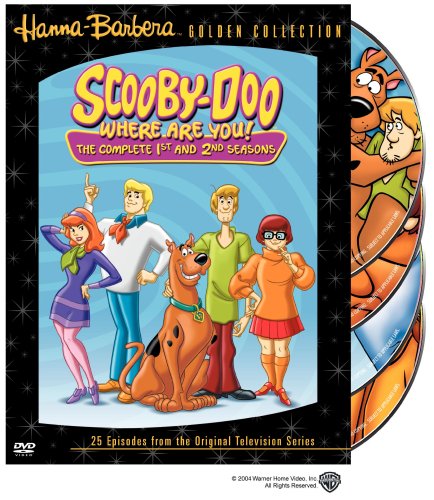 For the thirteenth day of 13 Days of Halloween for the Family, we recommend Scooby-Doo.

When you think of Halloween it’s hard to not think about some iteration of Scooby-Doo and the gang, where everyday is Halloween.  With so many iterations of the show it’s hard to pick one to watch, but here are a few suggestions to get you started.

We hope that you enjoyed our 13 Days of Halloween for the Family over the past two weeks.  If there are any others’ that you would add to the list, please do so.

Have a happy and safe Halloween!

13 Days of Halloween for the Family: Day 12, E.T.: The Extra-Terrestrial 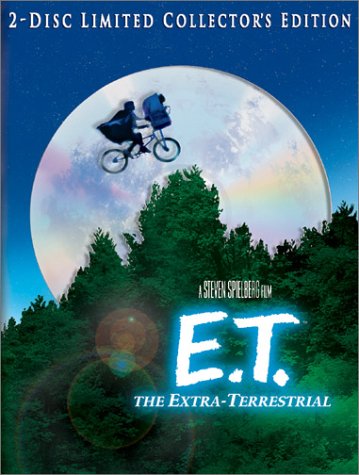 For the twelfth day of 13 Days of Halloween for the Family, we recommend E.T.: The Extra-Terrestrial.

As a child this was one of my favorite movies, and is one  of only two films that I’ve seen in theaters three times.  And I must admit, the product placement of Reese’s Pieces and Speak & Spell probably helped to make me a fan of both.

Despite all of the changes through the years of the releases (it’s no longer cool to be a terrorist or a hippie for Halloween, and guns should be replaced with walkie-talkies), this is, and always will be, a classic.

13 Days of Halloween for the Family: Day 11, Beetlejuice 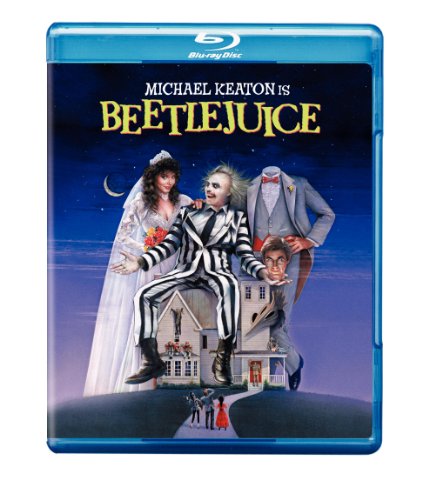 For the eleventh day of 13 Days of Halloween for the Family, we recommend Beetlejuice.

Starring Alec Baldwin, Geena Davis and Michael Keaton and directed by Tim Burton, this comedy fantasy will have you laughing.

“Lydia, I have a chance to teach you something here: you have got to take the upper hand in all situations or people, whether they’re dead or alive, will walk all over you.