Shawn Langdon did more than carry his weight in the 30 races he drove a Top Fuel dragster for Don Schumacher Racing, and team owner Don Schumacher wishes him the best in the next chapter of his racing career with Kalitta Motorsports.

“Shawn always will be part of the Don Schumacher Racing family,” said Don Schumacher. “He was a great, great asset to our team and an excellent teammate for our seven other drivers.

Funding issues kept Langdon from starting this season for DSR, but his Top Fuel career will resume with Kalitta.

“We have been looking for partners to help us run his team, but I will never stand in the way of a driver wanting to race. If I can’t give him that opportunity then I won’t hold him back.” 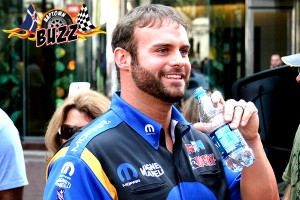 Early evening rain Friday wiped out the second qualifying session to open the 2017 season but Hagan and Don Schumacher Racing’s Mopar-powered by Pennzoil team was the quickest in the early afternoon session with a time of 3.840 seconds at 330.15 mph to hold the provisional pole heading into Saturday’s final two qualifying sessions before the eliminations rounds the following day that will air live on the Fox broadcast network.

“It’s been a long winter,” Hagan said. “I’ve been chomping at the bit to put a mouth piece in and put a helmet on. I’ve had a lot of frustration and I was ready to take it out on the racetrack.

“It’s really nice to come out here and roll out of the box and run an .84. It was one of those runs where you knew you had to get it in (because of pending rain) so it’s a pressure filled situation. It needs to get it down the racetrack because you need to get qualified and you have the rain coming in.”

In Top Fuel, eight-time world champion Tony Schumacher with crew chief Mike Green and the U.S. Army team led DSR with the third-best run of the day at 3.729 (325.06) with three-time world champion Antron Brown and the Matco Tools dragster, winners of the past two championships, is ranked fifth with a time of 3.732.

The post Matt Hagan on pole for Mopar at Pomona to start 2017 Mello Yello season appeared first on Naptown Buzz.