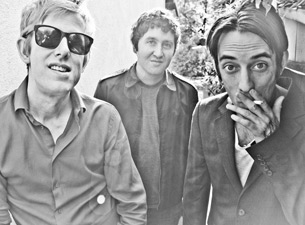 On their debut album, “A Thing Called Divine Fits,” Boeckner and Daniel stick to their previous bands’ respective styles. The new group melds together to create almost a bi-tonal album in which some songs recall Wolf Parade and others sample Spoon. Instead of crafting a disjointed LP, the group has created one with a distinctive flow. The Wolf Parade-influenced cuts, such as the lead track, “My Love is Real,” feature Boeckner’s wavering vocals over steady synthesizer lines and a solid drum machine. Album standout “Would That Not Be Nice” consists of distorted vocals, maracas, aggressive guitar strumming and a groovy bass line. Daniel’s lyrics pack a punch, cutting through the track with some serious attitude.

“A Thing Called Divine Fits” is an indie rock aficionado’s dream come true: two well-respected and acclaimed groups emerging from the shells of their separate projects to give birth to refreshing new music.

Tickets are on sale now. General admission tickets are $19 in advance, $21 day of show. Purchase your tickets through LiveNation.com, Old National Center Box Office, Ticketmaster outlets, or charge-by-phone at 1-800-754-3000. Applicable fees apply to all ticket sales.