The 2nd Annual Taste of the World Timmy Trivia event is just around the corner! Start getting your teams of 8 together for another year of mind-bending world trivia at the Athenaeum in the Mass Ave. district. The Second Helpings Culinary Class will be preparing all of the delicious international cuisine and each dish will […]

Monty Python’s Spamalot is a musical comedy “lovingly ripped off from” the 1975 film Monty Python and the Holy Grail. Like the film, it is a highly irreverent parody of the Arthurian Legend, but it differs from the film in many ways. The original 2005 Broadway production, directed by Mike Nichols with Eric Idle writing […]

Burlesque in Brushstrokes at The Athenaeum Theater on Friday, January 25, 2013

The post Burlesque in Brushstrokes at The Athenaeum Theater on Friday, January 25, 2013 appeared first on Naptown Buzz.

The inimitable Thomas “Fats” Waller rose to international fame during the Golden Age of the Cotton Club, honky tonk dives along Lenox Avenue, rent parties, stride piano players and that jumpin’ new beat, Swing. Although not quite a biography, AIN’T MISBEHAVIN’ evokes the delightful humor and infectious energy of this American original as a versatile cast struts, strums and sings the songs he made famous in a career that ranged from uptown clubs to downtown Tin Pan Alley to Hollywood and concert stages in the U.S., Canada and Europe.

Mel Waiters at The Athenaeum Theater on Sunday, September 2, 2012

THEY COME BACK “The wait is over!!!” Mel Waiters Show

With songs like, ‘I Ain’t Gon’ Do It’ (which his male audience is really relating to) and the title cut ‘They Come Back’, he is definitely letting you know that he knows what his audience loves. And, that’s good southern soul lyrics and music that makes any juke joint jump. Mel’s collaborative cut with Cupid, ‘Barbeque’ is a real house pleaser. Not to mention the song that makes us forget about the economy and just party, ‘Everything’s Going Up’. Mel Waiters never fails to bring a fresh sound a new look to and good old’ feeling. He brings a PARTY! Enjoy!!

The post Mel Waiters at The Athenaeum Theater on Sunday, September 2, 2012 appeared first on Naptown Buzz.

A Night to Unite at The Athenaeum Theater on Monday, August 20, 2012 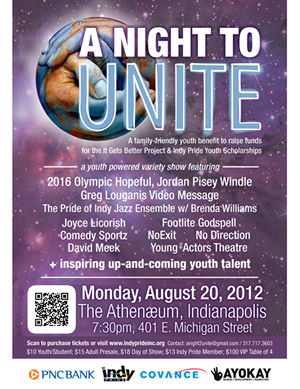 A Night To Unite is a family friendly youth benefit sponsored by Covance CCLS, PNC Bank and Indy Pride, Inc.to raise funds for the It Gets Better Project & Indy Pride Youth Scholarships. It will take place at the Athenaeum Theatre at 7:30p.m.on August 20, 2011.

A Night To Unite is unique in that it showcases youth who would not otherwise have an outlet for their amazing talents while simultaneously putting them on stage with other acts who have already become well known — creating an atmosphere of confidence while adding direction to their lives.

The time has come — Monday, August 20th at 7:30 pm — to band together at the Athenaeum Theatre. Join forces with Covance CCLS, PNC Bank, Indy Pride, Indianapolis youth, and the It Gets Better Project in showcasing some of the best in young family entertainment. Take a stand against hate. Make a difference, just by watching outstanding young performers do their thing on stage. See the talent of today on the road to becoming the superstars of tomorrow.

The post A Night to Unite at The Athenaeum Theater on Monday, August 20, 2012 appeared first on Naptown Buzz.